Phase One
LA to Italy, via Philadelphia and New York 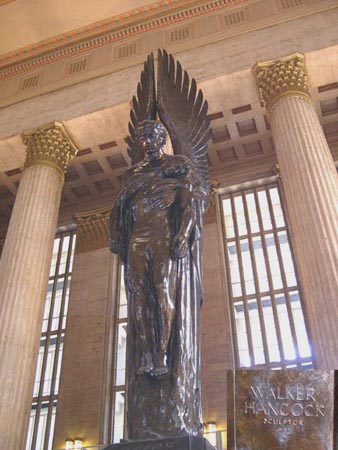 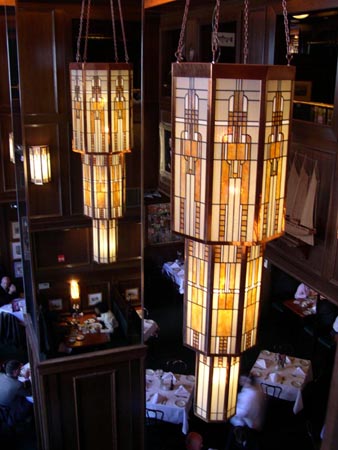 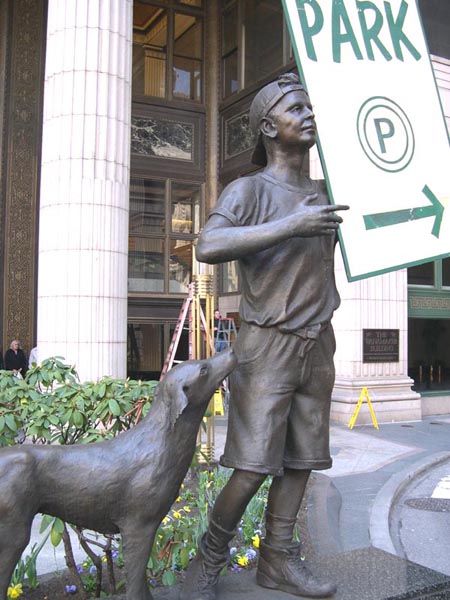 Where they could have simply put up a sign, they put up this sculpture!
"The Sign Boy" (1990), northeast corner of City Hall Square. 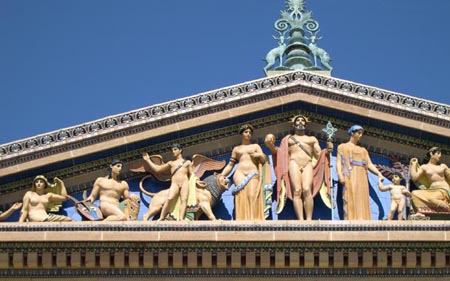 North Wing Portico, Philadelphia Museum of Art. Overdone? You be the judge! 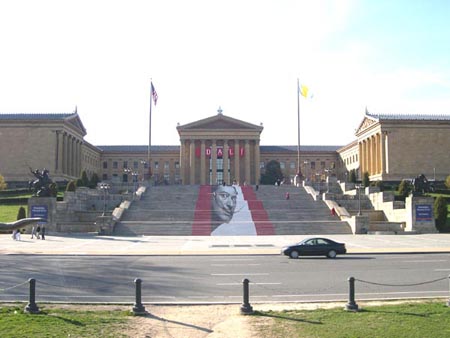 Philadelphia Museum of Art during the Spring 2005 Dali exhibit.
The Dali image is pasted in segments on the vertical side of each
step, so it is only visible as a whole from this angle! 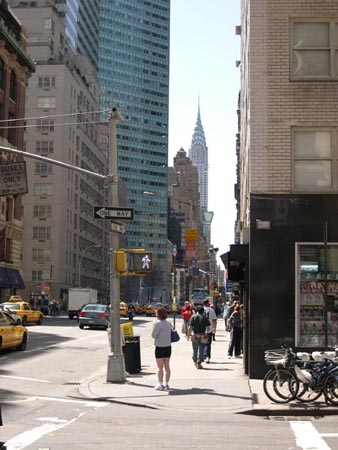 Ahhhh, New York.
Looking South on Lexington from 57th (as if you couldn't tell!) 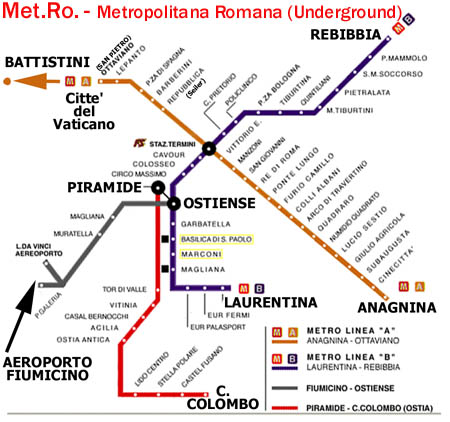 I found upon arrival that one can easily get around the city via the Met.Ro.
No, that's not mis-typed; it stands for "Metropolitana Romana"
which is their subway system! 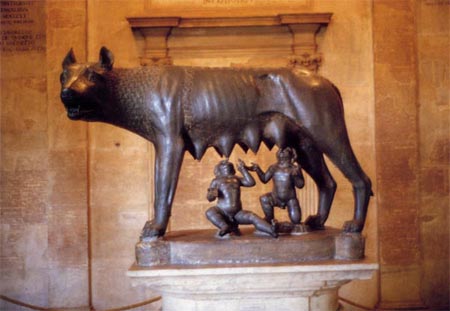 If you don't know the legend (story?) of Romulus and Remus,
no doubt this statue will look awful strange! (image from tourist postcard) 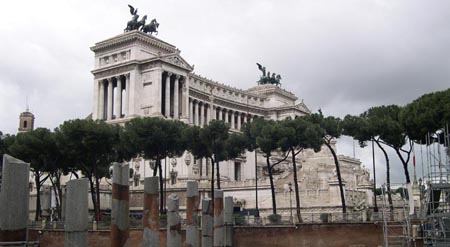 Note to self about Rome: BIG, with feral cats!
There is no way to convey the enormity of this monument to
Vittorio Emanuele II. "Humongous" doesn't even come close. 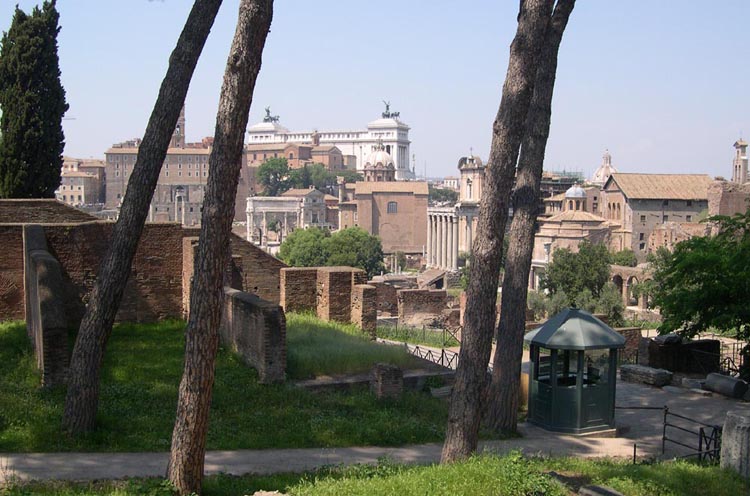 Again the Vittorio Emanuele II monument, seen from the Palatine Hill
with an ancient Forum in between. 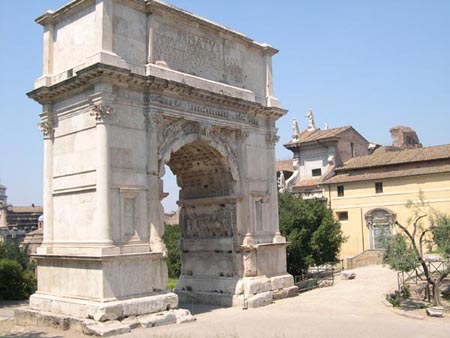 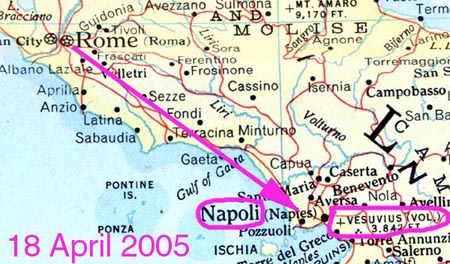 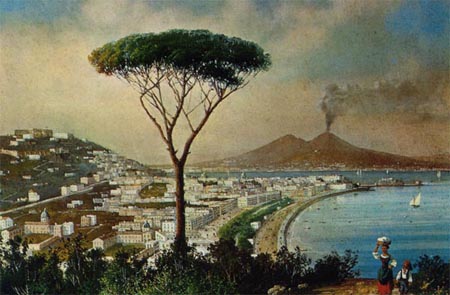 A vintage view of the Bay of Naples; note the villain in the background
(image from tourist postcard) 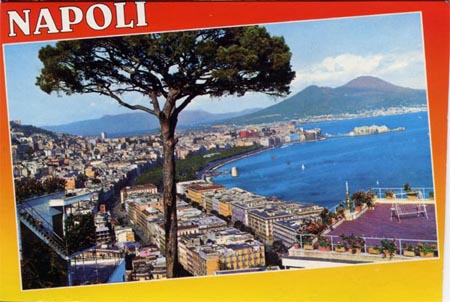 A modern view of the Bay of Naples; note how much the tree has grown!
(image from tourist postcard) 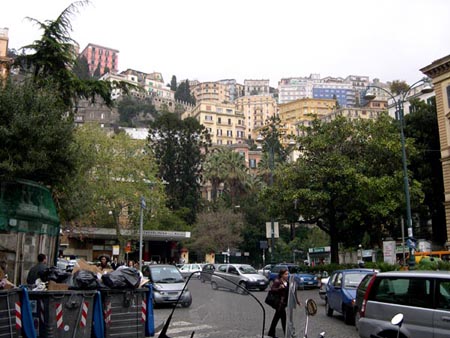 Napoli is, how you say, a little bit congested! A constant stream
of cars and motorcycles (and horns!) -- a criminal waste of such
a beautiful place. By the way, whereas Rome has feral cats, Napoli
is mondo cane -- a dog's world. 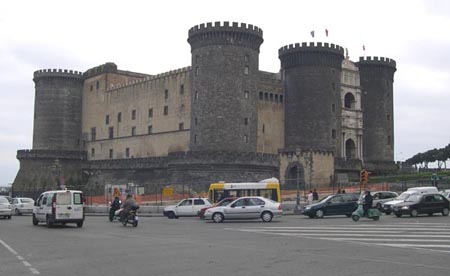 Castle on the Bay of Naples, near the city center 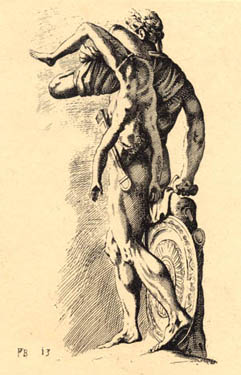 In the late 1960s, I saw the drawing shown here, which was curious
in that it seemed to show a soldier carrying home a
newly-bought (or newly-captured) slave, something that is purely
ancient-world, unthinkable today of course. (continued . . .) 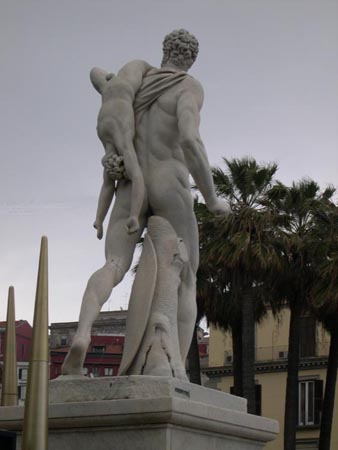 Years after seeing the drawing, I was reading a novel in which
"a statue in the Naples Museum" was described, and it seemed to
be this same image, but it was said that the soldier was Hector
(of Troy), and the "slave" was in fact his brother, Troilus.
The implication was that they were merely playing, or that Hector
simply was carrying his brother home. The statue was referred to
as ΕΚΤΩΡ   ΠΑΙΔΟΦΩΡΟΣ -- Hector the child-carrier.
This picture shows an outdoor copy of the statue, which stands in a
Naples park. (continued . . .) 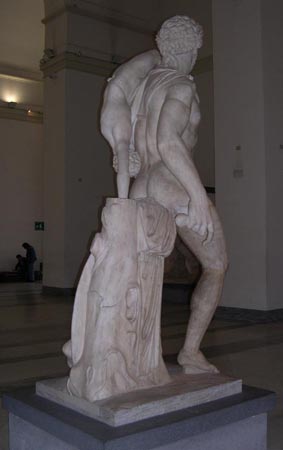 To learn more, I contacted an art historian I knew, and she told me that
the statue in the Naples Museum was, indeed, titled "Hector and
Troilus", but that it showed Hector carrying his dead brother
away from battle. I then asked an old friend in England what he
knew about it, and, as usual, he referenced Shakespeare to "prove"
that if the child were Troilus, he couldn't be dead, since Troilus
outlived Hector and went on to a torrid romance with Cressida (at
least in the Shakespeare play!). (continued . . .) 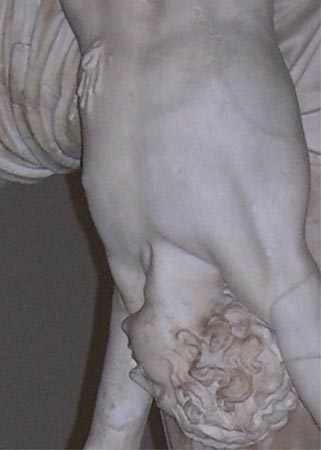 Finally, I come to the Museo Nazionale Napoli myself, and I see in
the information plaque on the wall that the sculpture has nothing
to do with Hector at all, but is called "Group of a Warrior with
a Child", and is thought to be either "Neoptolemus with the corpse
of Astyanax or, more probably, Achilles with the body of Troilus".
In any case, it's pretty obvious the kid is dead, as the wound shown
in this view looks pretty deep and is dripping blood.
We came a long way from 'Hector playing with his younger brother',
didn't we? 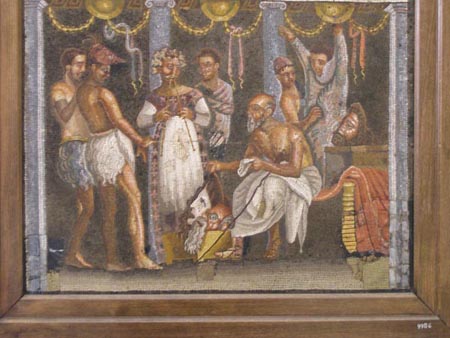 This is an incredibly minutely-detailed mosaic, not so evident
in this photo. 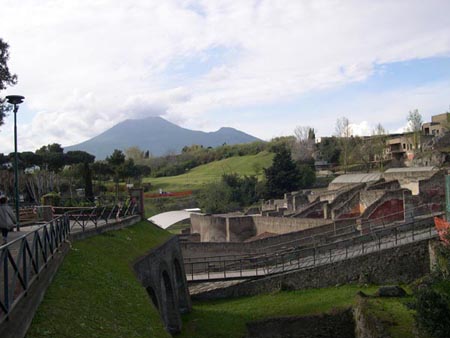 My first view of the ruins of Pompeii (right) and the culprit
(background). By the way, as for Pompeii, don't miss it if
death is ever in your plans. I've studied the place (and their
language), and knew what happened there in AD LXXIX -- still,
I was simply unprepared for the experience of being there. 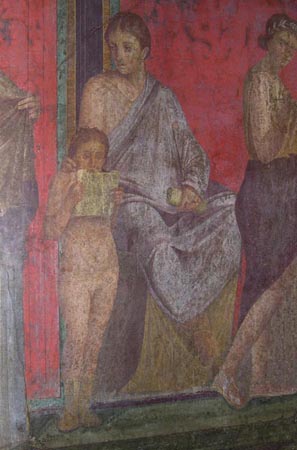 At the end of the Pompeii self-tour, there is the Villa of
Mystery (I have no clue as to what the mystery is/was), but inside
are the best-preserved frescoes that I saw at Pompeii.

At this point, I took the train from Napoli to the Eastern-Italian
port town of Bari to board the Ferry for the journey to Greece.