Phase Two
Greece and the Cruise to the Islands (and Turkey) 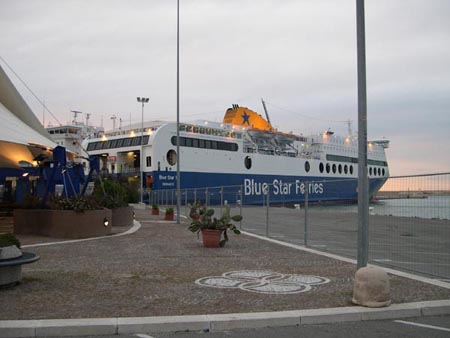 This boat rumbled for 16 hours from Bari (Italy) across the Ionian Sea
to Patras (Greece); not a pleasant journey. 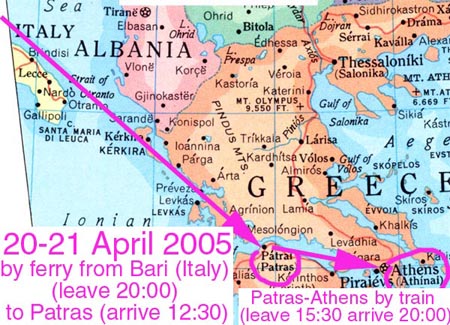 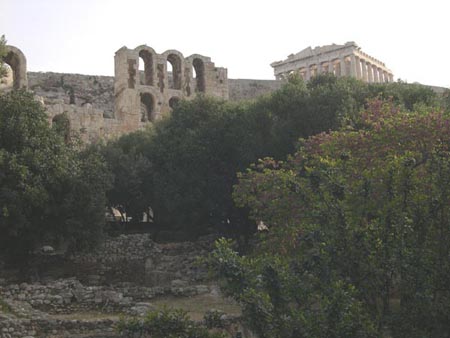 I was so impressed with this sight that I used a nearby pay-phone to call
my friend in Wales to brag that I was at that moment looking directly
at the Parthenon. The call lasted 8 minutes, and cost me the Euro
equivalent of $129.70. The moral of the story: when in Greece,
use pigeons. 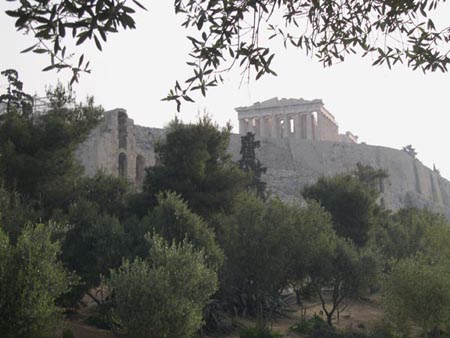 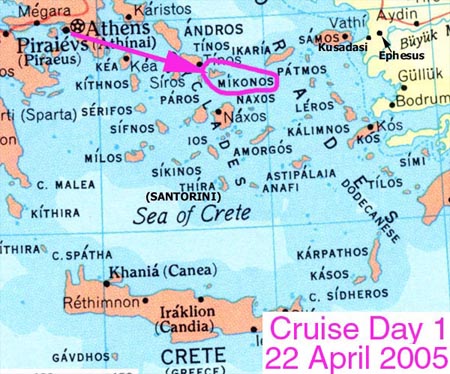 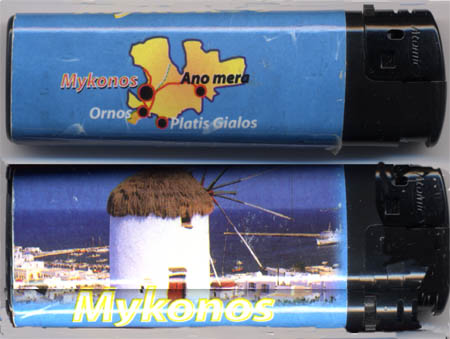 I went all the way to Mikonos, and all I got was this
lousy cigarette lighter. 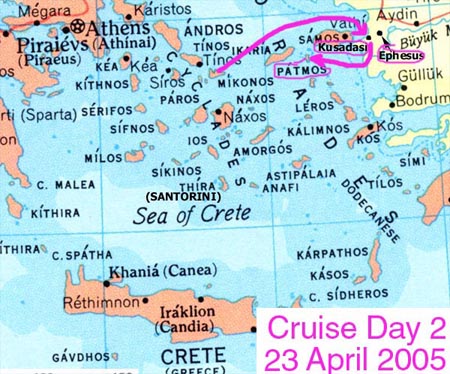 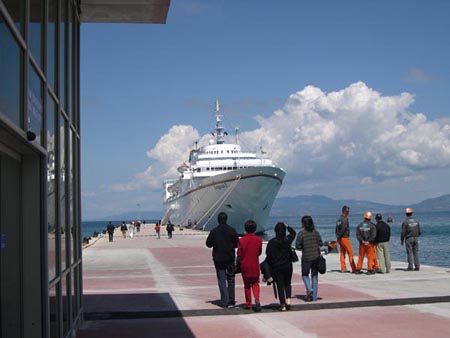 The Aegean I in Kusadasi (Turkey) harbor.
Inside the Customs House (on the left in this picture)
they sell Cuban cigars in boxes sealed with the official Cuban tape,
for less than the equivalent of $2.00 per cigar. I stocked up.
Too bad I couldn't bring any home! (wink, wink) 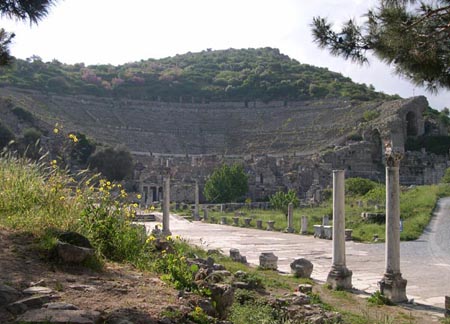 The great theatre at Ephesus, able to seat 24,000 people, the
largest theatre in antiquity. St Paul spoke here before a riot
forced him into protective custody and then exile on Patmos (see below). 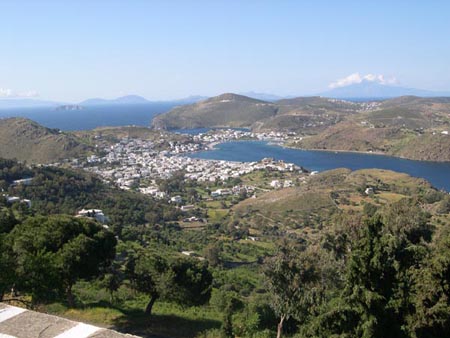 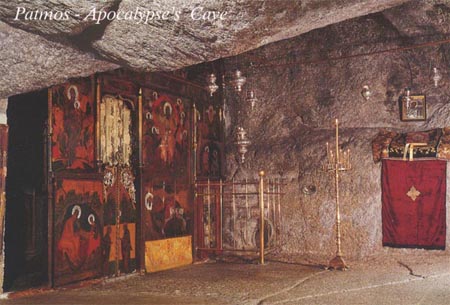 The actual cave where St Paul is said to have received the
Revelation and dictated the words to his pupil.
(image from tourist postcard) 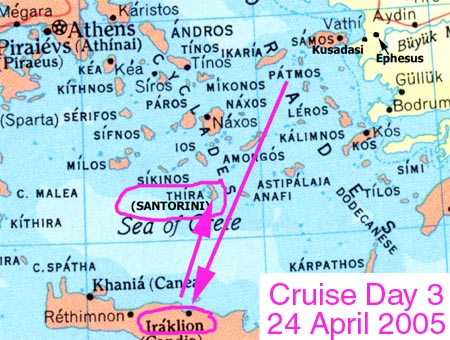 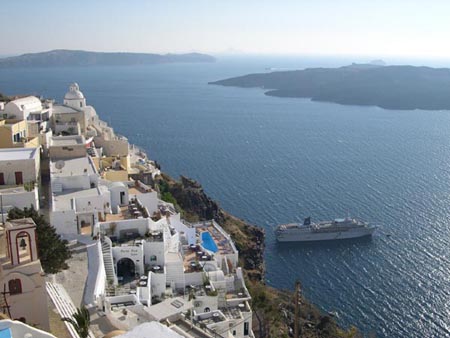 The Aegean I in the harbor at Santorini (also called ΚΑΛΛΙΣΤΗ -- "most beautiful").
The dark grey "island" upper right is the volcano that blew the original
island apart in about 1625 BCE. The water you see here which is now the
harbor used to be land connected to the land on which I'm standing to take this
picture. Many believe this was the location of the legendary Atlantis. 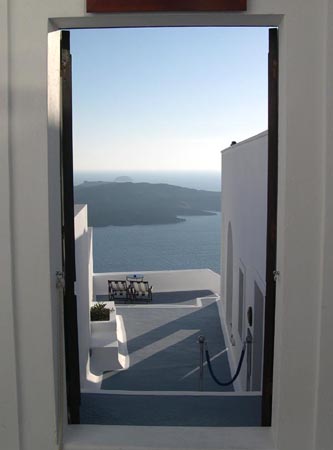 A simple hotel in Fira town (the main city of Santorini).
High-resolution JPEG of this image available: click here (1.8 MB) 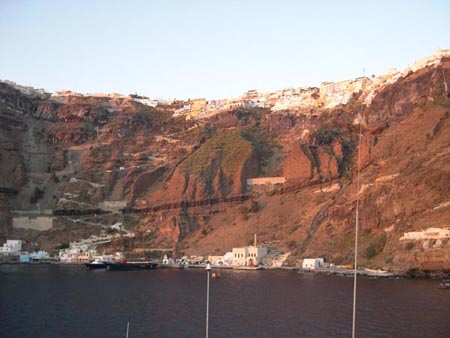 Santorini's Fira town (on the ridge of the crater that was left
after the volcano erupted) at sunset. The town faces West.
The harbor of Skala is below, at sea level. 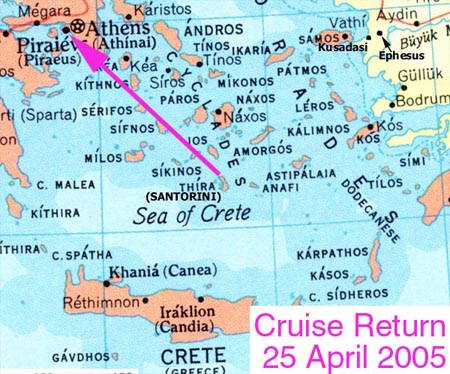 From Athens, I fly to Milano for the last portion of the trip, in Italy again.