South America Vacation, January 2006
NOTE: Translatons of Spanish words and phrases seen here are not included in this Web page. If you need help, ask an amigo / amiga.

Santiago de Chile has a medium-high hill called Cerro San Cristobal. In the 1920s they built a funicular railway to a point near the top of the hill, then at some later time (the date is unclear to me) they placed this statue of Mary at the top. 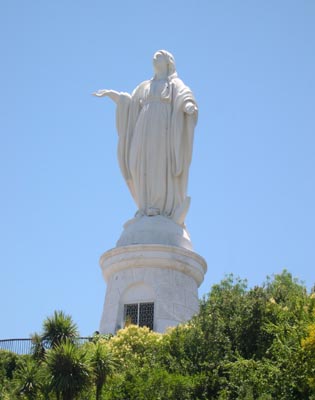 This was obviously an attempt to out-do the great Christo Redentor statue atop Corcovado in Rio de Janeiro. Christo is awesome. This statue is, well, cute by comparison. Still, a trip to its steps gives a great view of the city.

Speaking of the funicular, the car in which I rode to the summit had a plaque commemorating the fact that in 1987, Pope John Paul II rode in the same car, on his way to pay his respects to the statue. OK, so I was impressed.

Chile has a hero who helped to liberate his country from colonial rule, so streets and parks are named after him. This must be one of the most unusual names in the Hispanic world. 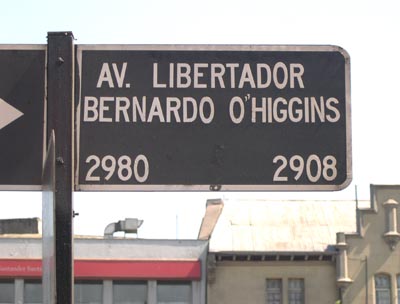 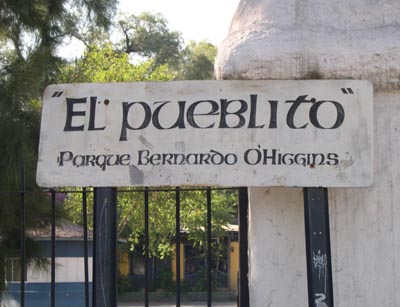 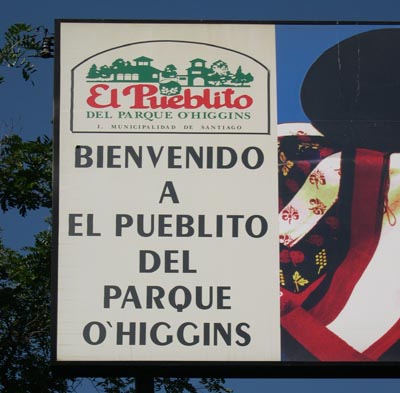 Montevideo's main square gives the impression that it is a great metropolis, like some of the other capitals in South America. It is a charming city, but most of it is not "big" like it looks here. 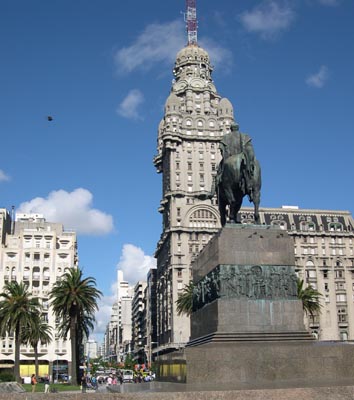 Just to the side of the horse statue seen above, boys enjoy the fountain. 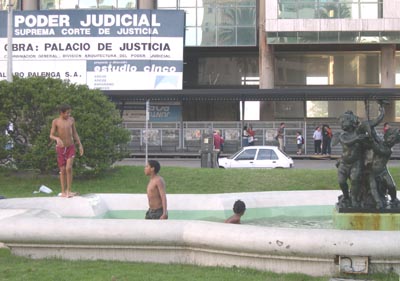 Montevideo, like most major cities in Latin America, is about political graffiti. This is on the side of an abandoned building. 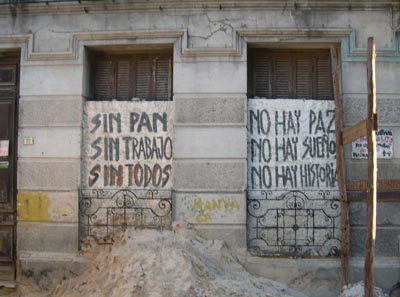 This sculpture is in the center of a "walking street" -- a shopping area no longer open to motor vehicles that leads up to the Cathedral square. Montevideo, again like the other cities I visited, has a great deal of civic (public) sculpture, and very different and interesting it is, too. 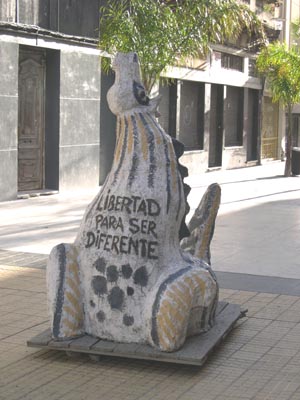 As noted above, political graffiti are seen everywhere. 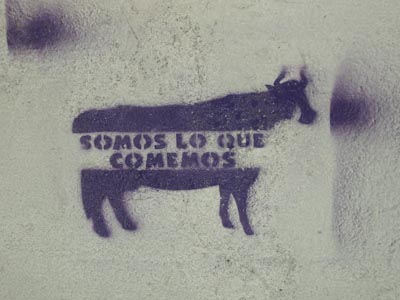 First, a stencil likely placed by vegetarians. Good luck trying to change the eating habits of Argentina! England's Beefeaters have nothing on these people! 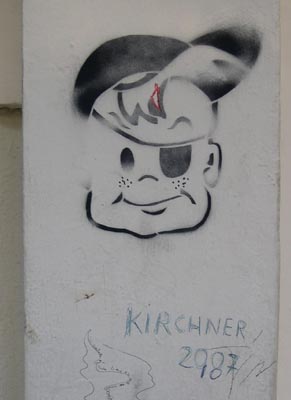 This stencil seems to be innocuous and not political, but I include it here for two reasons: 1) the added comment "Kirchner 2007" (which has been modified, not by me!, to read "Kirchner 2987" -- Kirchner is, I believe, the president of Argentina), and 2) as a comparison to the Bush stencil seen below.

Americans are treated fine in Argentina -- at least I was -- but it is an understatement to say that the Bush Administration is unpopular. 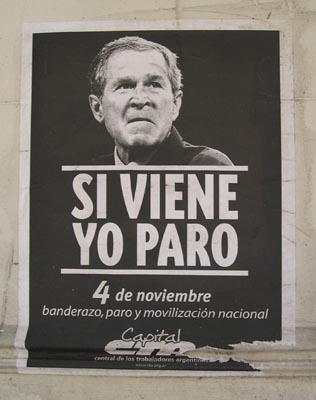 If I had found any pro-Bush graffiti or posters, I would have taken pictures of them to provide balance here. I saw none. This poster appeared in many locations, and I took this picture in the downtown area. 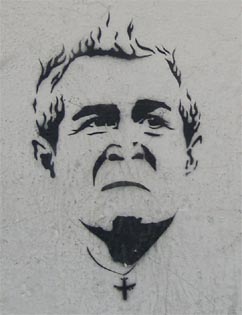 I only saw this stencil in one area, in a railway station a few stops northeast of Retiro (the main, central railway station at the north end of Buenos Aires' downtown area), but there I saw it in several different places around the station. Note that it seems to be the same image as the photograph in the poster shown above, except for the hair on fire. 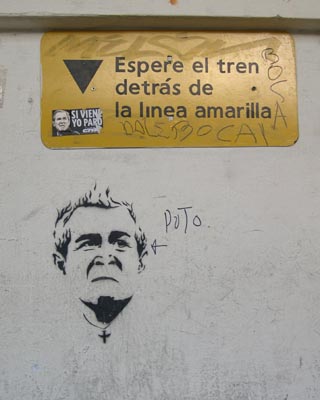 Someone had added a "caption" to this one, which was on a wall underneath the train information sign. Note the "Si viene, yo paro" bumper-sticker on the yellow sign, which matches the picture and slogan on the poster shown above. 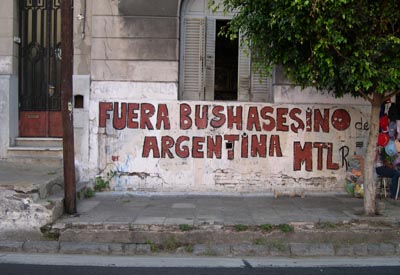 Considering the time and attention this slogan must have taken -- this is not drive-by, middle-of-the-night graffiti -- the emotions must run high.

I realize words are somewhat run together. The "artist" learned too late, apparently, that there was a tree and a doorway on the right!. Let me help: the text reads, "FUERA BUSH ASESINO [de] ARGENTINA --MTL".

The subject of this poster, seen here in a dark railway station (sorry for the lack of focus), is an important and serious message, indeed. Even though I noted at the top that Spanish translations wouldn't be provided here, this one deserves to be included: "Breast Cancer has a Cure". 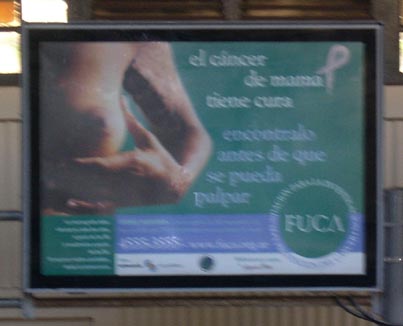 Still, the acronym for the organization is, in my opinion, a bit ill-advised. 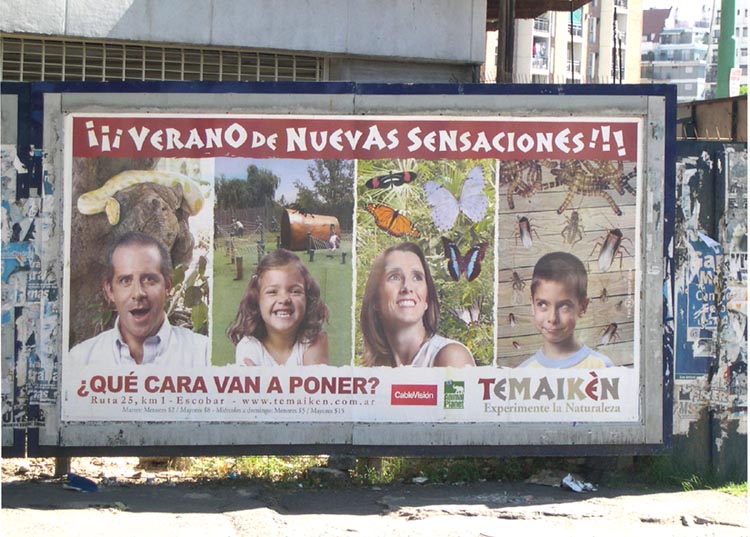 This was a cute little advertising poster for a nearby nature park. When I say "little", I mean "insignificant", not physically small, as it was actually about 4 feet by 8 feet. Like much advertisting around the world, it uses stereotypes to make people feel comfortable about the product or service.

The use of stereotypes like this allows me to play one of my favorite games: what if the shoe(s) were on the other foot? Imagine if the father were thinking of playing in the park, the mother about the snake, the girl about the insects and the boy about the butterflies. That would change the whole nature of this family, and would likely make for a very different theme park adventure! 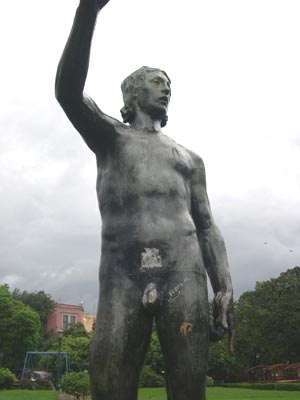 A highlight of Buenos Aires has to be the Recoleta Cemetery, where Eva Duarte Peron -- Evita! -- is entombed. This somewhat abused statue -- "L'Homme Parlant" -- is in the Plaza Intendente Alvear in front of the Cemetery. It was created by Léon-Ernest Drivier (1878-1951) in 1928. It seems posters and graffiti have been added over the years, and not cleaned up very well. 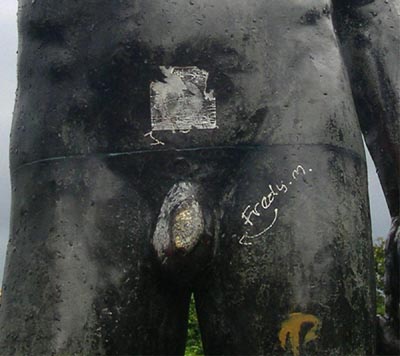 This close-up shows some particularly rude graffiti (but funny, I think, nonetheless). My advice to Fredy M. is to see his doctor soon! 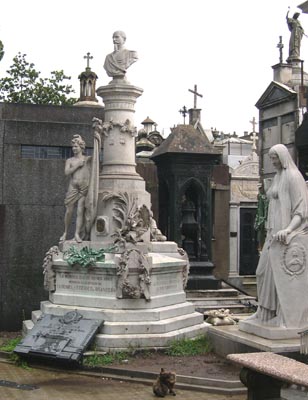 Now inside the Recoleta Cemetery. Above, I noted that Evita is "entombed" here, not "buried". It seems that most of the resting places are above ground, as you can see here, and many are quite ornate and/or interesting for various reasons. [Tomb of Coronel Federico de Brandsen (1785-1827).] 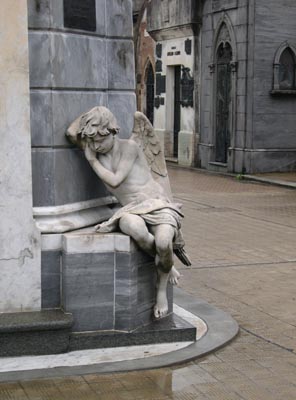 High-resolution JPEG of this photograph available: click here (0.8 MB)
[Tomb of the Francisco Gómez family. The same angel sculpture can be seen on the Dr Ventura Coll grave in this same cemetery.] 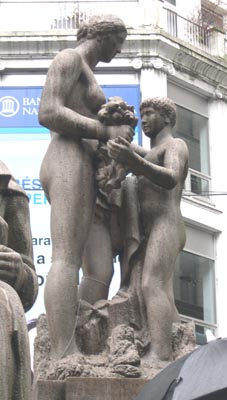 On the Diagonal Norte (a street that cuts across the otherwise North-South grid pattern), this is part of a family group out in front of a bank. I think it shows a bit of artistic license. Yeah, sure, a mother and son exchange flowers in the nude everyday! 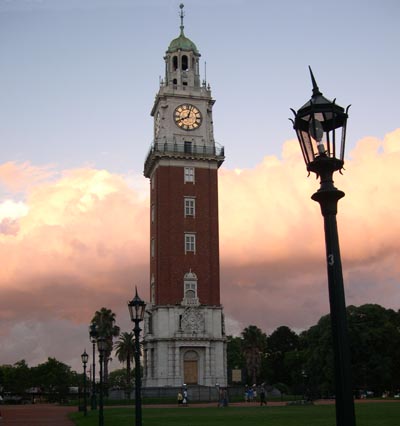 The Torre Monumental, in the square at the North end of the downtown area, just in front of the Retiro railway station.

The bells intend to sound the "Big Ben" chimes, but two of them don't work, and one is only barely audible, a puny, weak failure. One of the ones that doesn't work is the one that tolls the hour (three for three-o'clock, &c.), so you have to look at the clock anyway to know what time it is. At least it's easy on the eyes -- a fine tower!

We end our trip, as I did, in La Boca, a seaside neighborhood to the south of the main city of Buenos Aires. There's no question it's a tourist trap, but so colorful that it shouldn't be missed.

Many of the signs are 1890s-stylized like this, reminiscent of the Coca Cola ads of the early 20th Century, at least to me. 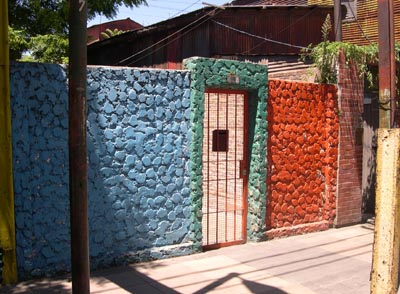 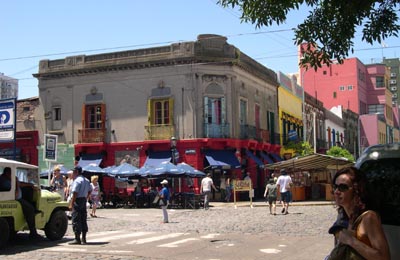 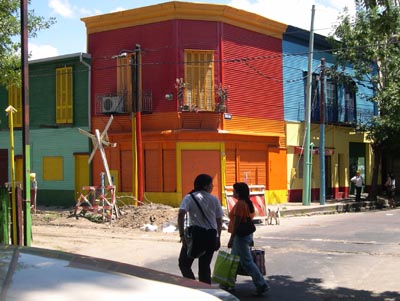 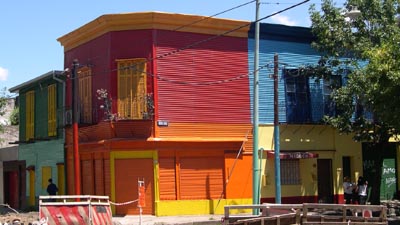 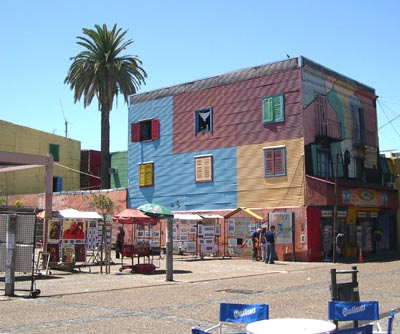 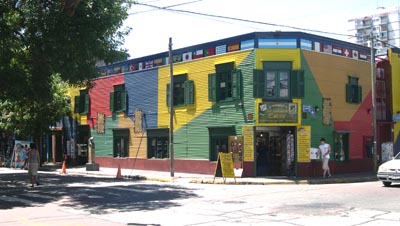