Phase Three
Back to Italy, then Home 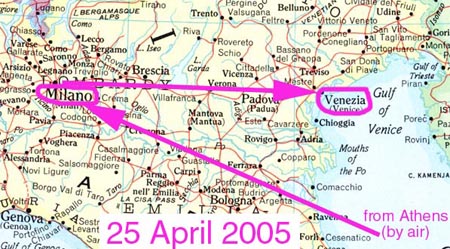 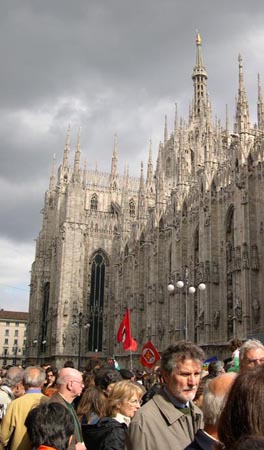 I have looked forward for a long time to seeing the Duomo
(Cathedral) in Milano with my own eyes. When I was about 9,
my grandparents made their first trip back to Italy after
leaving there when they were teens to avoid the horrors
of World War I ("the war to end all wars").
There are two things I remember from my grandfather's
jerky home movies -- the Bridge of Sighs in Venice (see below)
and the almost unbelievable detail of the front of
Milano Cathedral. My plan was to fly from Athens to Milano, take a
look at the Cathedral, and then continue by train to Venice, all the
same day. Two things made this a very different experience from what
I had expected. The chosen day was 25 April, which is some kind of
holiday in Italy, and the Communists/Socialists in Milano had decided
to hold a rally in the Piazza in front of the Cathedral. The Piazza
and all the streets within blocks were jammed with people, and there
I was, inching my way along, with all my luggage! This side of the Duomo
is what I saw first, which gives you an idea why I wanted to view the facade.
The hordes of people were my first disappointment, but after about half
an hour of fighting the crowds, I finally got round to the front where
I saw . . . 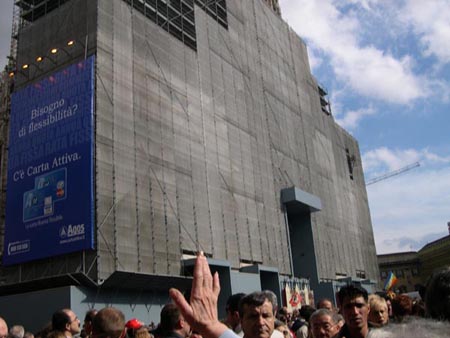 The entire facade of the Duomo was covered in scaffolding and cloth.
Oh well, at least next time it will be clean. 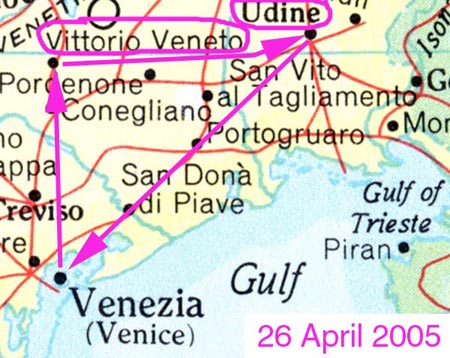 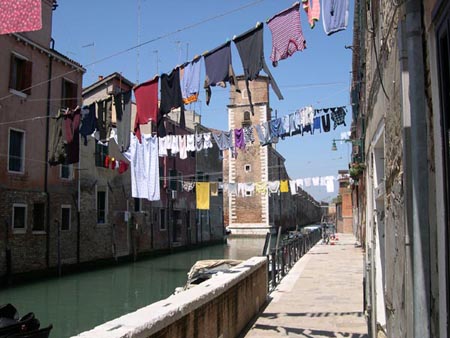 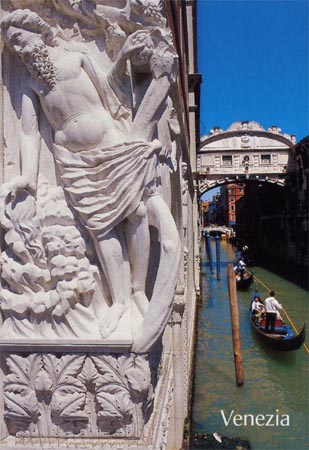 This is the famous Ponte dei Sospiri (Bridge of Sighs), on the right.
It's said that it got its name because prisoners were taken across it
from the Doge's Palace (left) to their executions (in the building on
the right), and they would sigh upon their last view of glorious Venezia.
(image from tourist postcard) 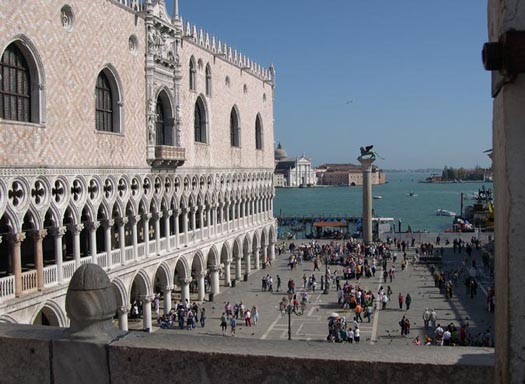 The Doge's Palace (left) and the Grand Canal. 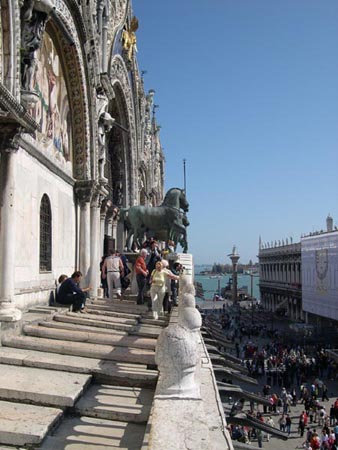 On the balcony of the Basilica di San Marco, where you can see
the replicas of the famous Four Bronze Horses (originals,
from the II century, are in the Basilica's museum,
just a few feet inside from this balcony). 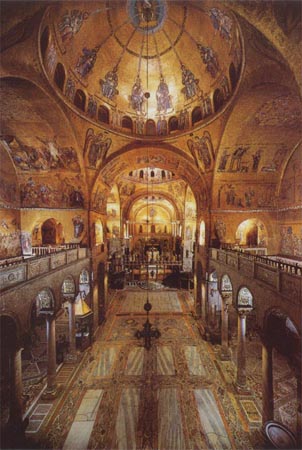 Inside the Basilica di San Marco
(image from tourist postcard) 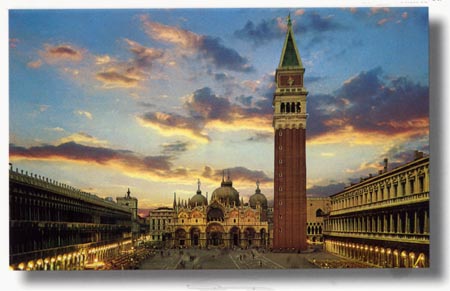 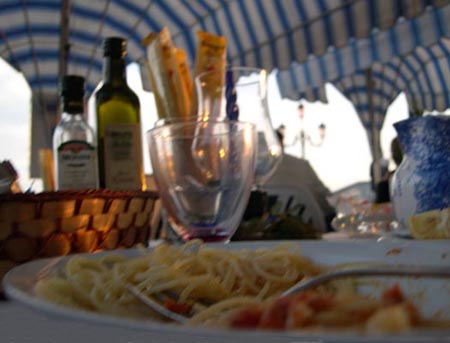 This is one of those fortunate mistakes -- a photo taken at the
table in the restaurant where I was having dinner, while testing
the camera in preparation for the sunset pictures below.
I know it's out of focus -- it adds to its charm! (it's a "feature") 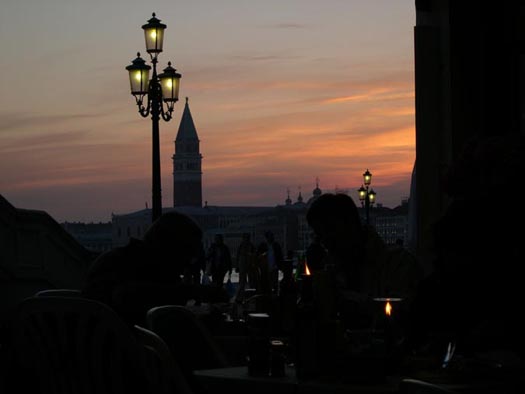 Sunset over Venice, literally taken from the table in the restaurant. 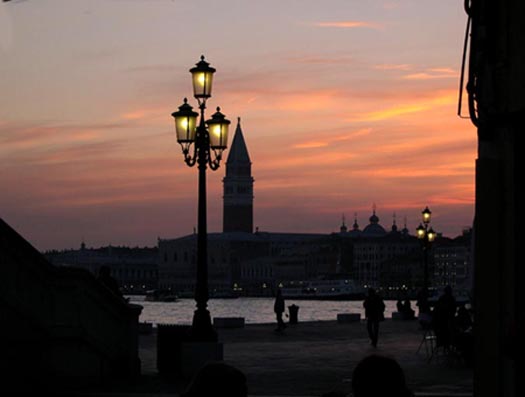 Same vantage point, except that I stood up to get the reflection
off the Grand Canal. 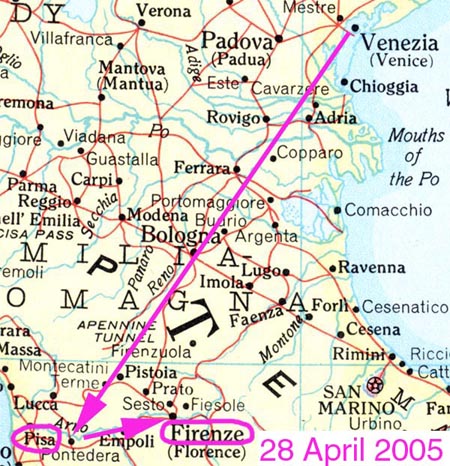 Leaning Tower of Pisa? You be the judge 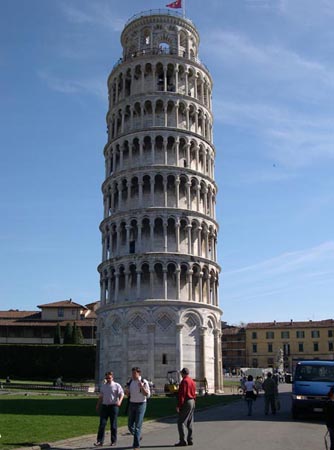 It looks to me like it's not leaning that much. 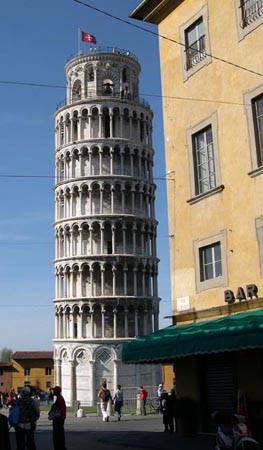 Maybe it's the buildings in the town that are leaning! 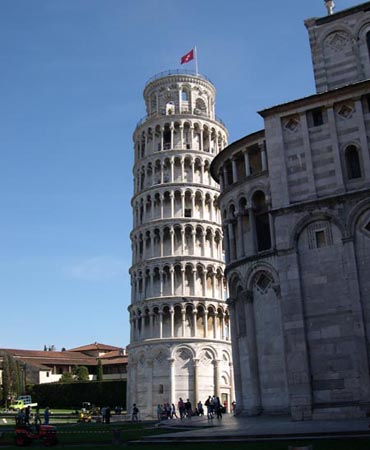 . . . or mabye the Duomo (Cathedral), right, is the part that leans 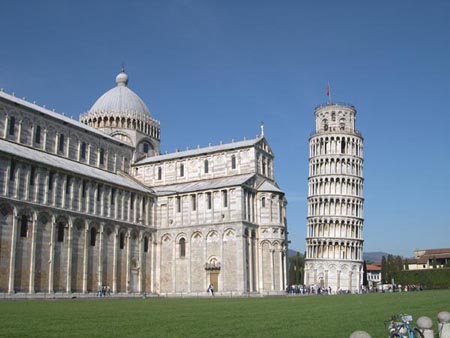 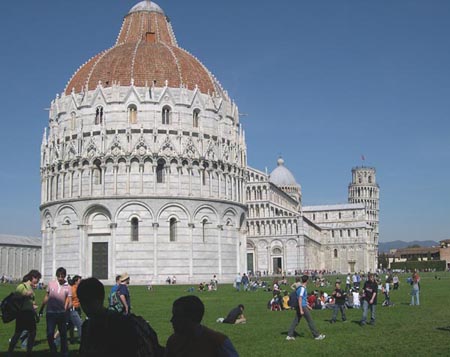 The whole layout is really quite impressive. The Battistero
(Baptistry) is nearly as big as the Cathedral, and it is,
in effect, one room with one purpose. The buildings seen here
are laid out on a large, open, grassy space called
"Piazza dei Miracoli" -- "Miracle Square". 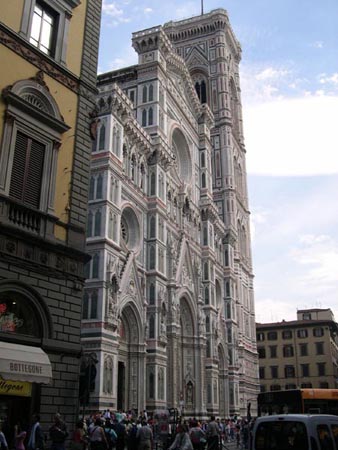 This Duomo (Cathedral) of Firenze and it's matching Battistero are
remarkable. Those patterns aren't paint, they're inlaid,
matched marble! 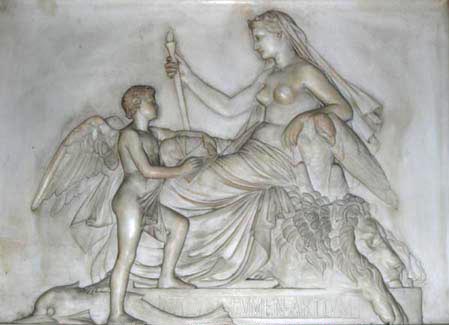 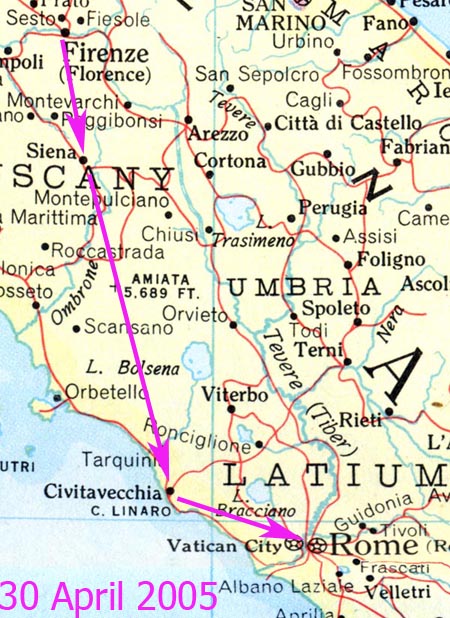 Though I have no pictures, a note about Siena: there are images
of the Romulus/Remus/Wolf statue (see above) everywhere, yet Siena
is at least two hours (by train) away from Rome. Also, the
inscription SPQS is seen everywhere -- Senatus Populusque Siena?
I didn't have enough time there to find out. I highly recommend
Siena, by the way, as a fine example of "High Tuscany";
quite a beautiful almost-mountaintop setting. 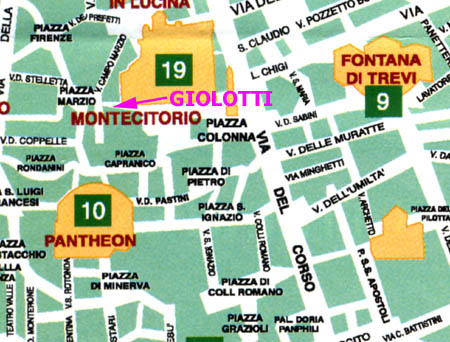 One last thought before saying "Arrivederci Roma" -- DON'T MISS
GIOLOTTI. I've included this map to help you find it, as it's not
easy to locate, but you must not fail to visit this Gelateria.
You think you've had ice cream? You ain't seen nothin' yet!

MISCELLANEOUS SIGNS AND IMAGES FROM THROUGHOUT THE TRIP