Iceland in December, 2008
and a few days in New York, as usual 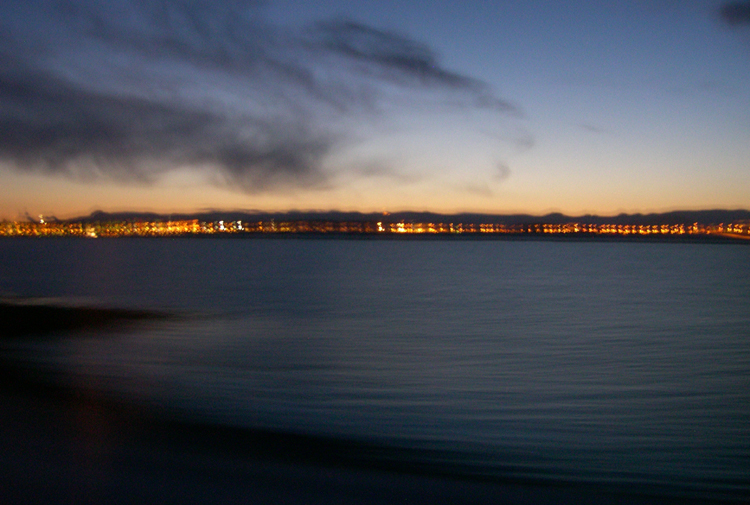 New York to Reykjavik (JFK-KEF) is an overnight flight that arrives around 7am. This is what Reykjavik looks like from the bus as we approach around 9am -- the rush hour! 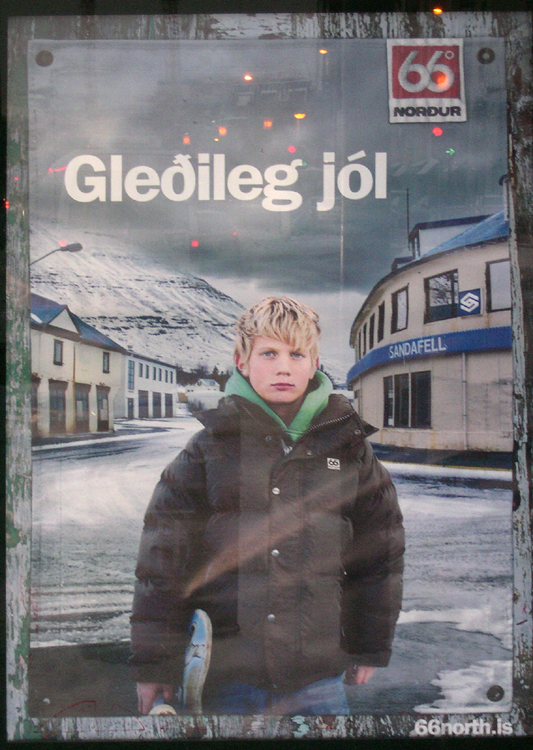 The city was decked out for Christmas, as later pictures will show.

This view looks NorthEast from the Loftleidir Hotel, my temporary home. 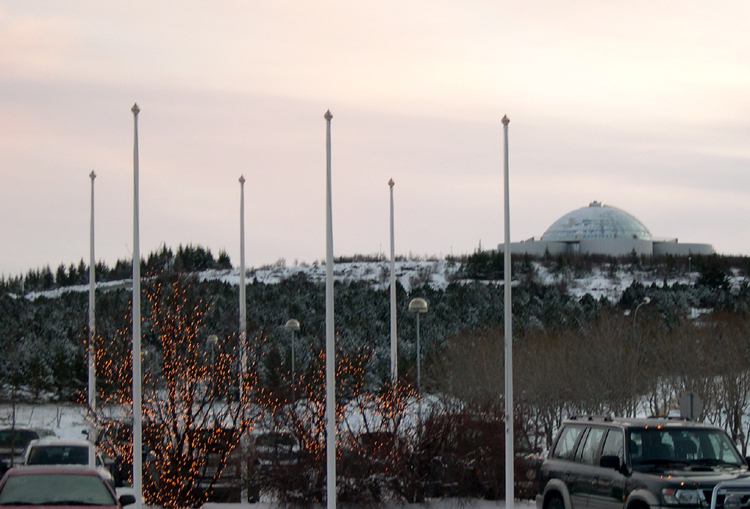 To the East of my hotel is The Perlan, a visitor complex and the most expensive restaurant in Reykjavik (and that's saying something, as ALL restaurants are expensive). The Perlan sits on six geothermal cylinders. The entire country gets about 40% of its power from geothermal sources, the rest from hydroelectric. No oil or coal! A lesson there. 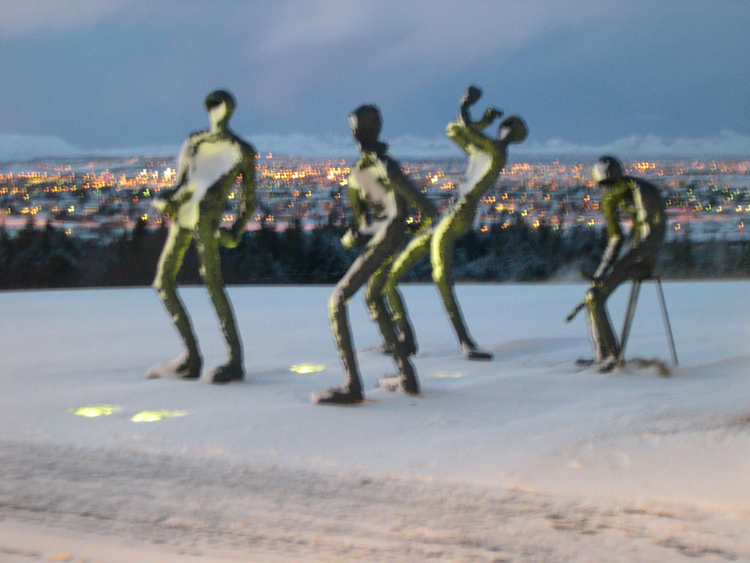 Taking pictures in Iceland in December is a challenge, what with the dark and the shivering . . . This grouping (young people out too late one night?) is in front of The Perlan. 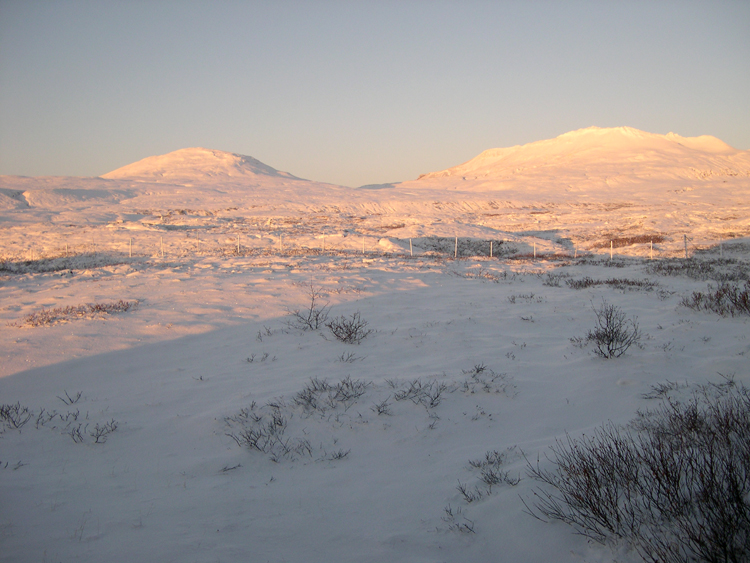 Reykjavik city is mildly interesting, but (for me) the real interest was in the outlying areas. This tour goes to the Gullfoss, which is a large, double-decker waterfall (see below). 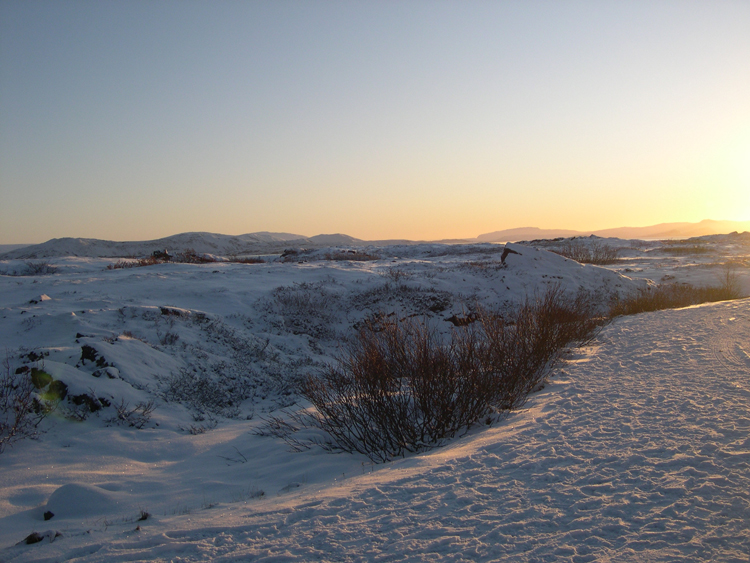 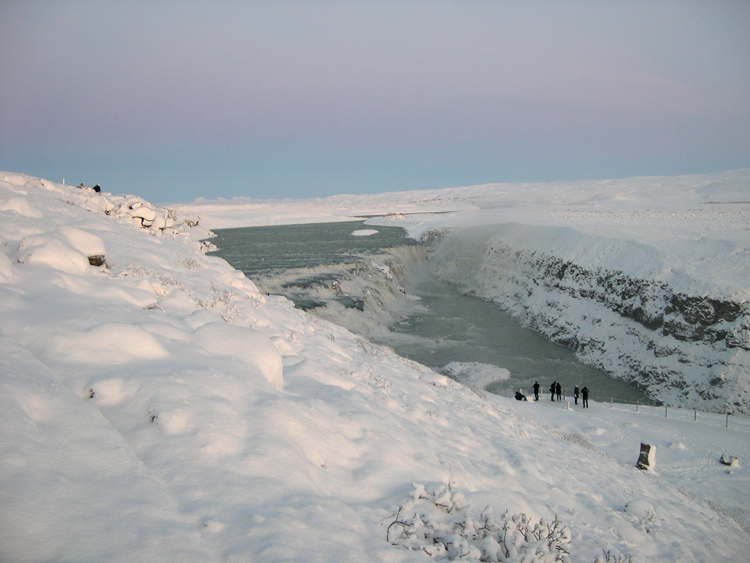 The tour arrives at the Gullfoss at about 4pm, so the waterfall is in shadow. I might have taken more pictures, but the hot coffee and bowls of traditional Icelandic lamb stew (soup) at the lodge just behind me seemed more appealing at this very cold moment. 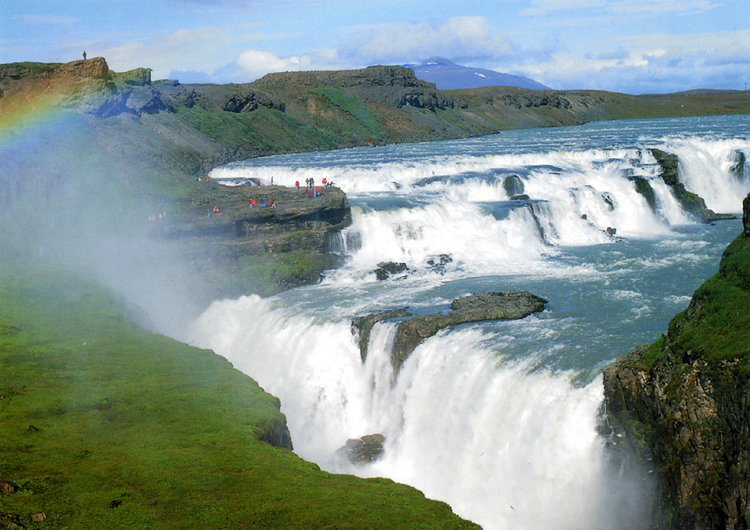 This photo from a brochure shows the Gullfoss (waterfall) in full daylight and without the snow-pack. It's pretty impressive. 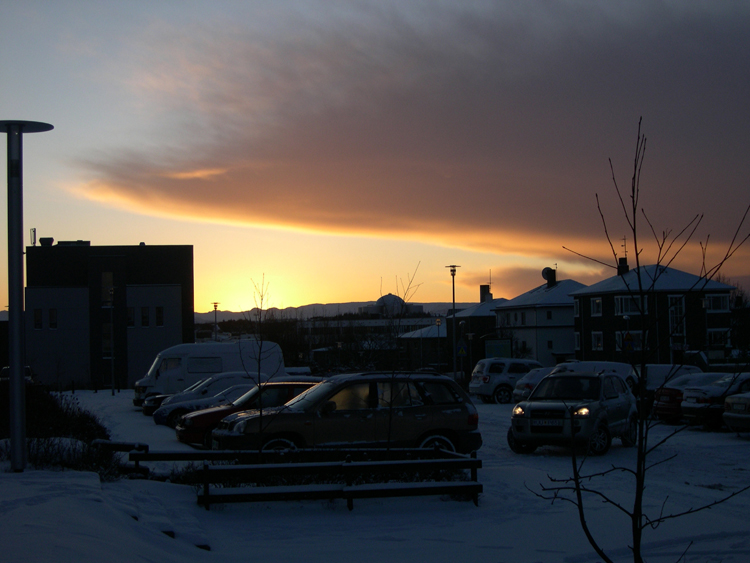 One of the reasons I came to Iceland was to see what it's like to have merely a 3-hour cycle of daylight each day. This is about 9:30am. 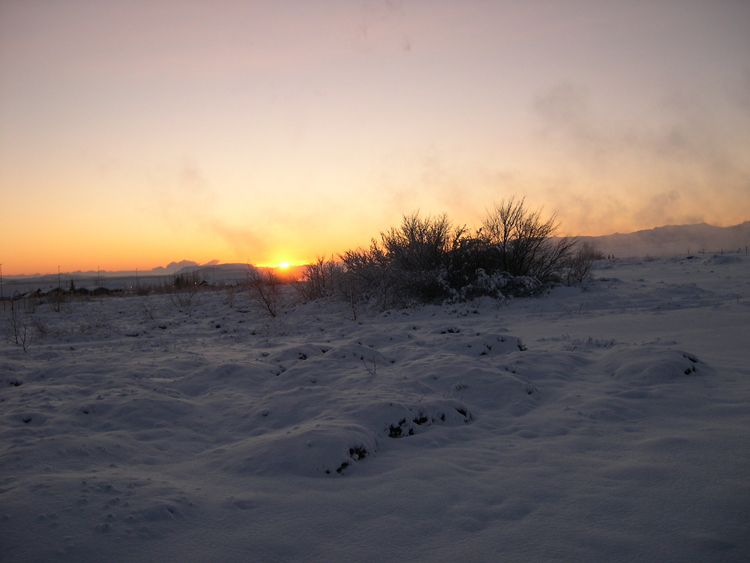 This is dawn, which happens about 11am at this time of year. 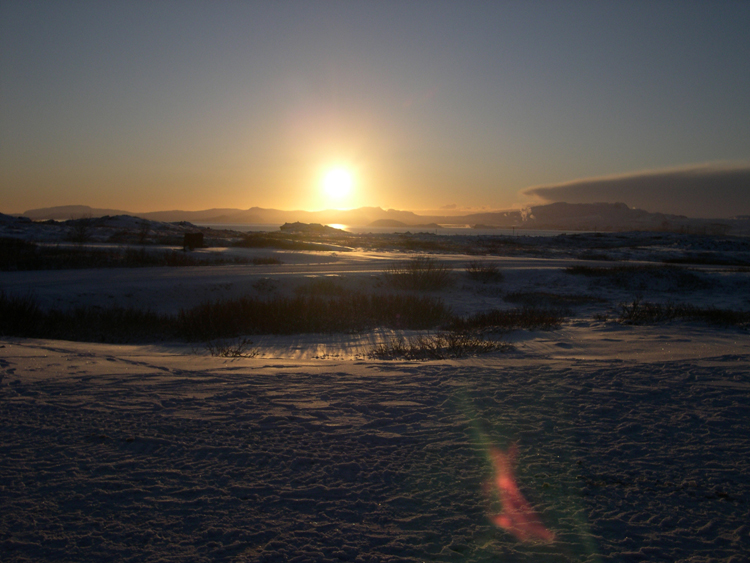 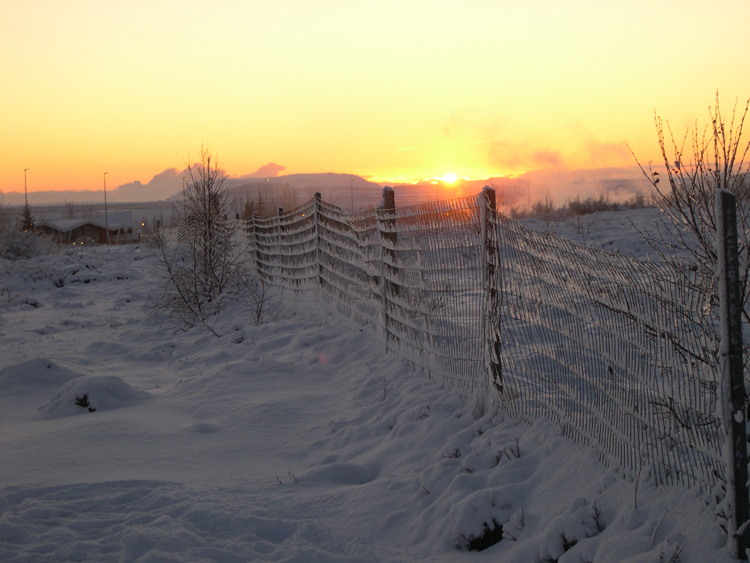 After a long day, finally sunset at 3pm! 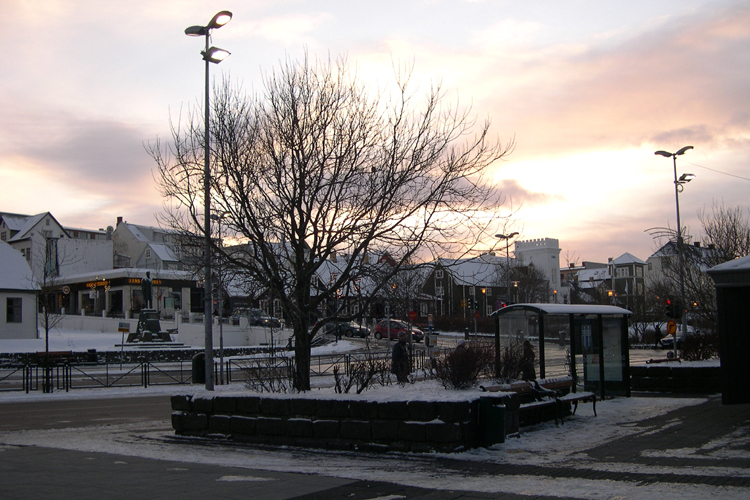 As noted above, Reykjavik is mildly charming, but isn't really old enough or big enough to compete with other European cities for interesting architecture. 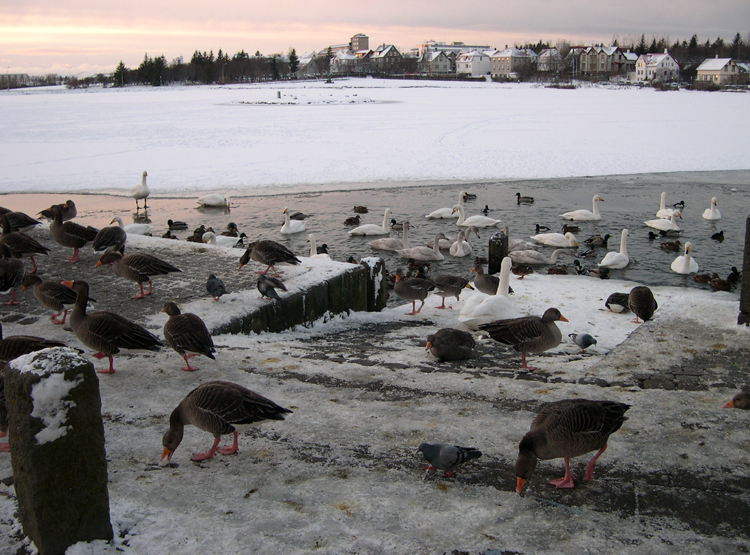 The center of Reykjavik has a large pond, most of which, of course, is frozen over. This edge, however, is relatively warm, inviting birds for obvious reasons. I didn't ask anyone, but I figure that either the City keeps the water warm just for the birds (they would do that sort of thing in Iceland!), or this edge of the pond is close enough to the underground sidewalk-and-road heating system that it stays melted. 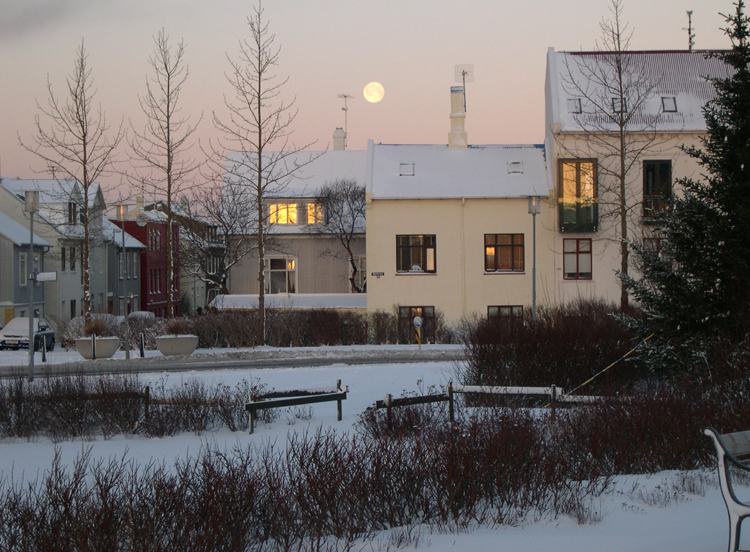 Reykjavik under the moon. 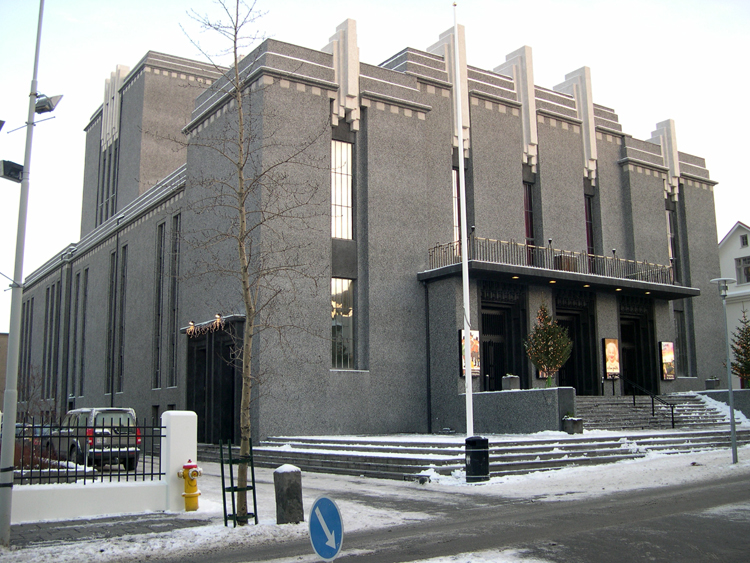 There are a few buildings of interest in this City. This one caught my eye because of the Art Deco style. It's the Iceland National Theatre. 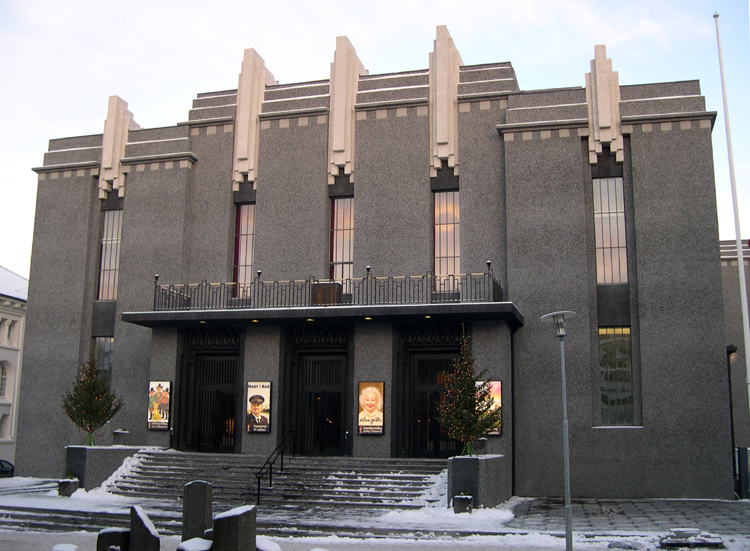 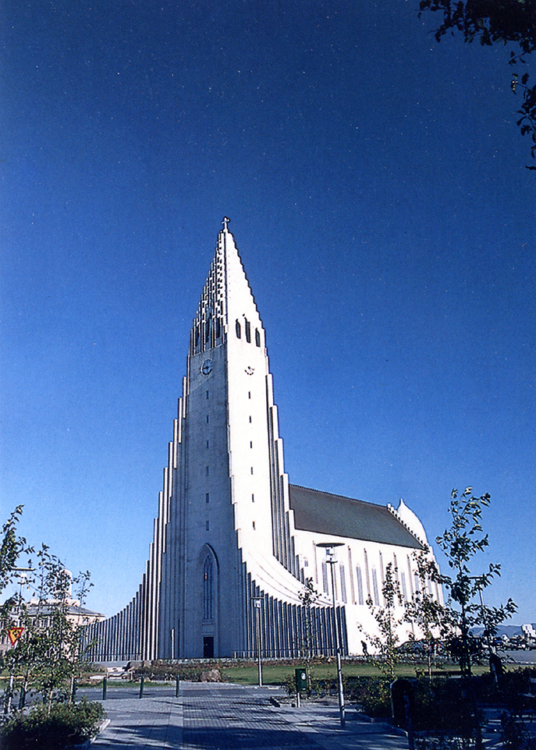 The Hallgrimskirkje, according to a tour guide whom I trusted, was designed by the same architect who designed the National Theatre, seen above. It's truly an impressive building . . . 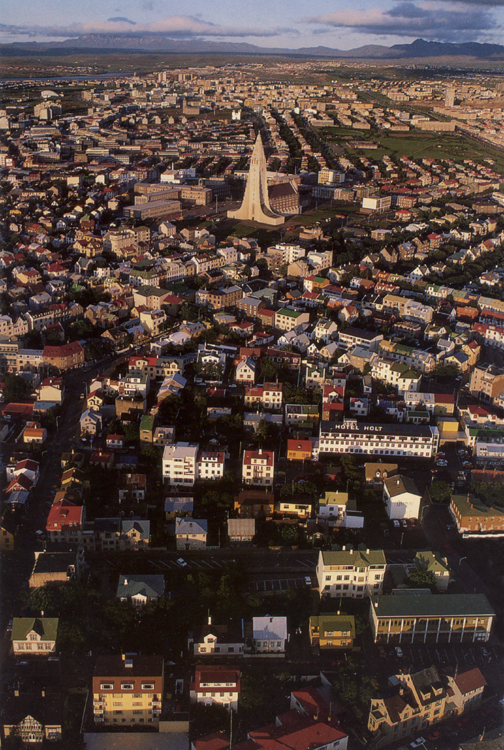 . . . and sits at an impressive site, on Skolavorduholt hill, overlooking "old" Reykjavik. Take that with a grain of salt. "Old" Reykjavik usually means early 20th Century.
Unfortunately, during my visit the magnificent tower of this church was sheathed in scaffolding (a curse on my vacations; the same thing happened all over Italy, most particularly with the Duomo in Milano; oh well, there's always next time). These pictures of the Hallgrimskirkje are from a postcard (top picture) and a brochure (church and city).

Return to New York for a few days 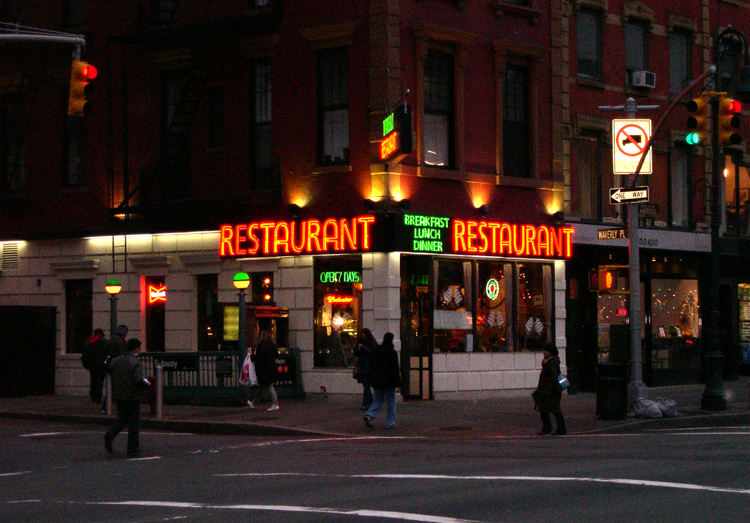 This looks like the restaurant seen in many episodes of Seinfeld, doesn't it? It did to me, so I took the picture. It isn't the same one (though I think both restaurants used the same neon-sign maker.) This one is at Waverly Place and 6th Avenue in Greenwich Village, while the Seinfeld one is at Broadway at 112th on the Upper West Side. 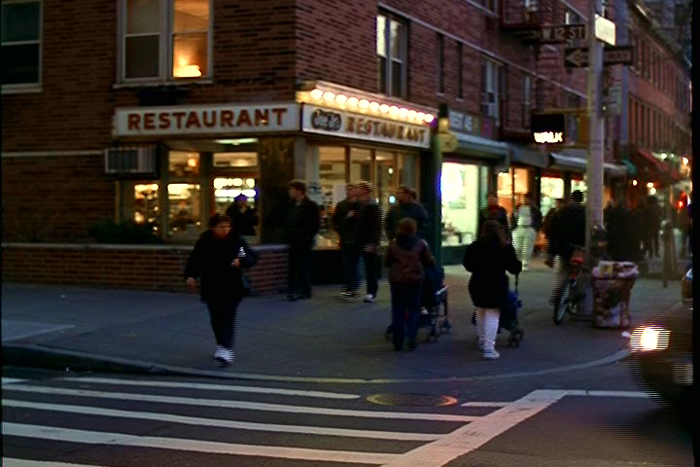 I guess a lot of street-corner restaurants have this look. Here's another one, seen in a Season 2 episode of Will and Grace called "Oh Dad, Poor Dad, He's Kept Me in the Closet and I'm Feeling So Sad" (image is taken from the episode broadcast). It's at 12 Street and Sixth Avenue, also in The Village, about five blocks North of the establishment shown above. But I digress . . . 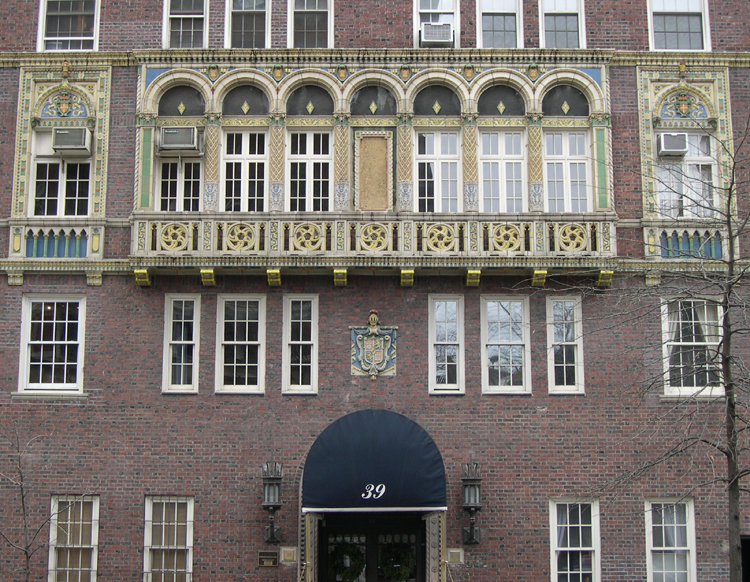 The facade at 39 Fifth Avenue. 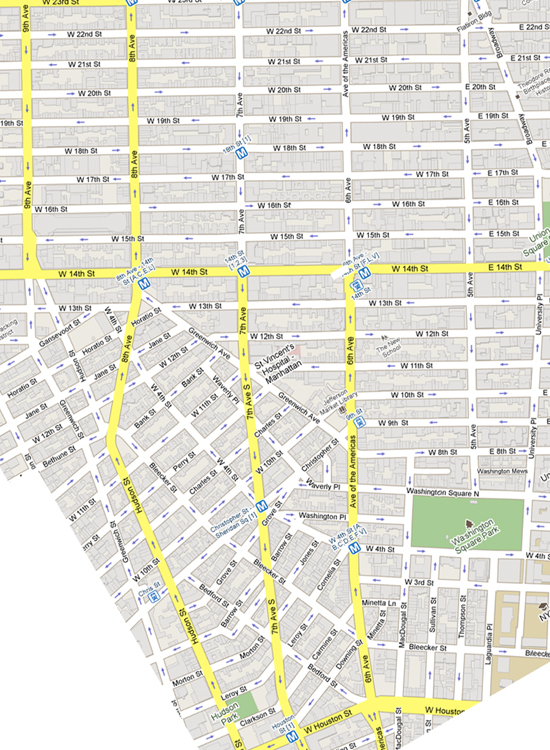 This trip to New York, I stayed in a hotel on 14th Street, on the North edge of the Village, or the South edge of Chelsea, depending on how you look at it. Walking around that neighborhood I was reminded of a curious thing I discovered years ago -- that West 4th Street actually crosses West 10th Street. Everyone knows that the numbered streets in New York are parallel, running east-west. How could these streets cross when they should be six blocks apart? Well, things just get weird in the Village West of Sixth Avenue (Avenue of the Americas). This map shows the crossing, and the pictures below show the intersection. Yes, as you can see, West 4th goes on to intersect with West 11th, West 12th and West 13th as well. 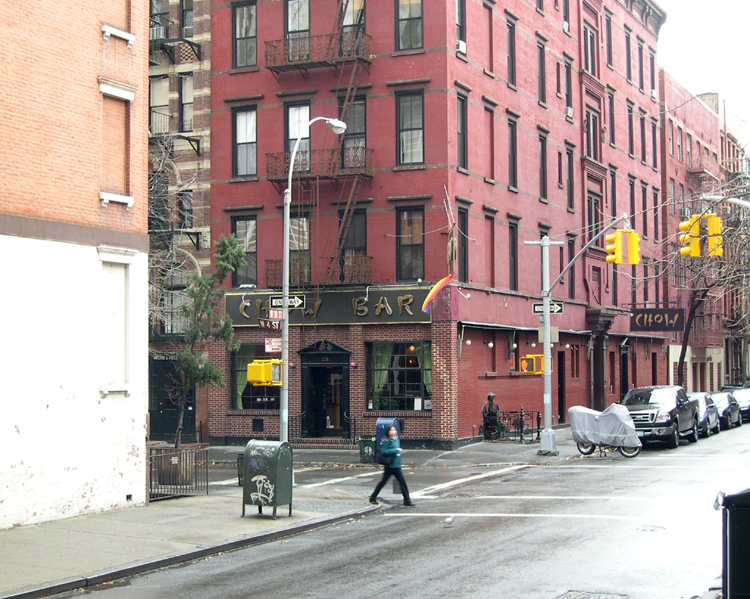 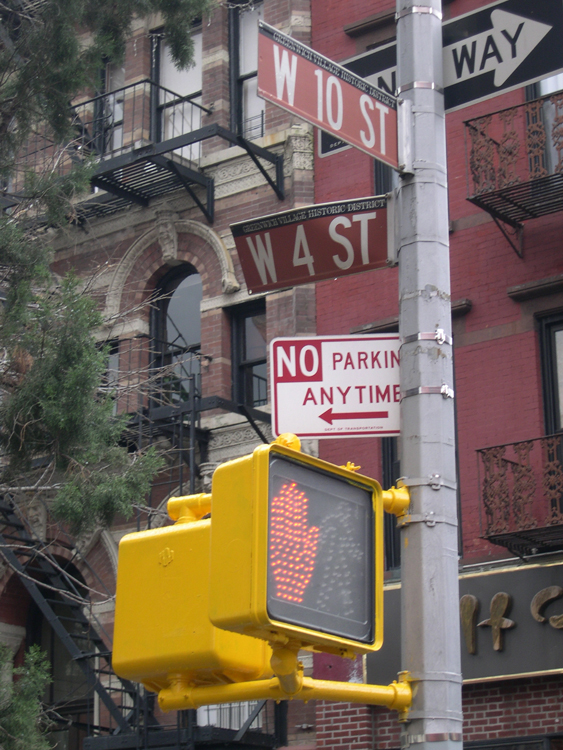 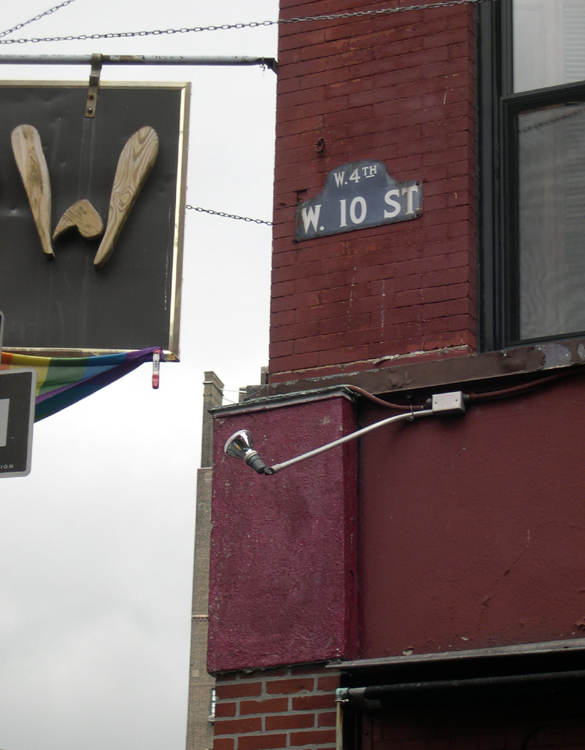 Finally, the current concession to "progress". A few years ago a big cement chunk of Yankee Stadium fell into the seats. It was not during a game, so no-one was there, but it worried George Steinbrenner, to say the least. But what to do? Moving out of the Bronx was unthinkable, though I heard it was considered. Upgrading wouldn't really be a long-term solution. The final decision was to build a new stadium across the street while they tear down the old one. I for one was glad to see they at least are replicating the style of the old facade as they build the new building (right). What remains of the old Stadium -- The House that Ruth Built -- (as of December 2008) is seen at the left.