NO NOISE -- resources for restoring peace and quiet

Resources for Reducing Unnatural Noise
and Restoring Peace and Quiet

Soon silence will have passed into legend. Man has turned his back on silence. Day after day he invents
machines and devices that increase noise and distract humanity from the essence of life,
contemplation, meditation . . . tooting, howling, screeching, booming, crashing, whistling, grinding, and trilling
bolster his ego. His anxiety subsides. His inhuman void spreads monstrously like a gray vegetation.
--Jean Arp [Hans Arp](1886-1966) Arp on Arp: Poems, Essays, Memories. New York: Viking, 1972, p.231

America is the noisiest country that ever existed. One is waked up in the morning, not by the singing of the nightingale, but by the steam whistle. It is surprising that the sound practical sense of the Americans does not reduce this intolerable noise.
--Oscar Wilde [Oscar Fingal O'Flahertie Wills Wilde](1854-1900) Epigrams - Phrases and Philosophies for the Use of the Young. New York: Lamb Publishing Co., 1909, "Impressions of America", p.252, the published version of a lecture Wilde gave for the first time on 24 September 1883 in Wandsworth Town Hall upon his return to England from the former Colony 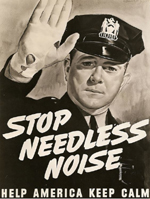 Noise is a pollutant. It degrades our environment and our lives in the same way that air and water pollution, food contamination and urban congestion do.

I believe we need to limit unnatural noise around us in the same way we have been reducing smog and river waste and other harmful products of our oversized society.

A positive way to look at what we need is this: we need to develop a new, pervasive notion of the importance of "quality of life" in our society. Similar to the now-fashionable notion of the importance of "going green", we need to give the relatively small components of a high-quality daily existence much more attention than they now get. We all know the big-ticket items: safety, roads, national defense, education, and, in recent years, air and water quality and attention to global warming. Many other, smaller, issues also affect our daily lives, such as litter, traffic flow, landscaping, quantity of outdoor advertising, parks and other public spaces, and, yes, noise. Communities that pay attention to these types of issues are better places to live, and are probably less prone to violence, crime, and many other social problems.

This is a bare-bones Web site with only a few sections:
Bad Noise -- a (partial) list of problems needing to be addressed
How or why did noise become a problem
Suggested alternatives and solutions
Evidence and opinions that noise is, indeed, a problem
Other resources that address the problem

How did the problem arise?

Government Recognition of the Problem

Suggestions for Fixing the Problems

Evidence and Opinions about the Problem of Noise

This is not recent: the problem was noticed a long time ago:

[gpjones@usc.edu] -- this site was updated on Monday, 2 May 2020 -- comments and suggestions welcome